The Truth About Money 💰

What is the real truth about💰?  Prolly that most people don’t have a fucking clue about it…if you want to keep it simple.  The subject of money is one of the most important things you could ever educate yourself about but few do.  Knowing how the hell this 💩 really works & what purpose the Central Bankers really serve or rather what purpose you really serve 2 them is pivotal to understanding the

today & how it may evolve tomorrow .  If that last part makes you pause it should because so many view this from an egocentric pov which is so myopic they never take a minute to think what if everything coming out of their mouthes was really just hot garbage 👾

would yield.  They were even smart enough 2 leverage the human population as one of the 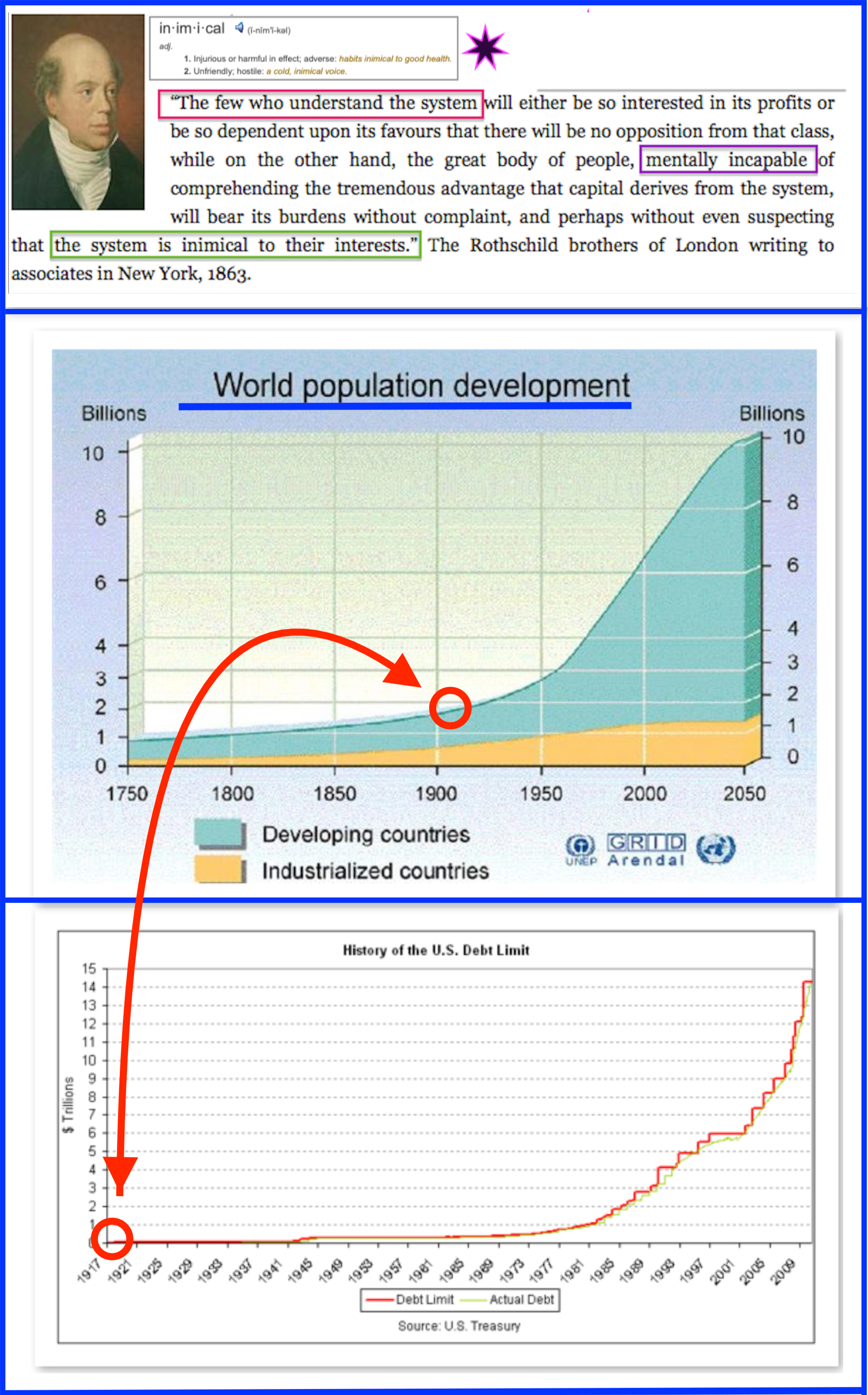 You have to stop and ask yourself what does this statement quoted from the bankers really mean & what if they were right?  Many people speak about fiat money as if it were an alternative to gold money from times past, but that is an uneducated mistake that only reveals that they have no idea how the monetary system has evolved with the coming of fractional reserve banking or use of money credit & just how far we’ve come since the times of the gold smith.  Fiat currency is not an asset to be hoarded like gold that is not its specific utility, instead fiat acts as a conduit which we can use to transfer or exchange value through. So say you wanted to sell a house in order to purchase a few cars you would need to exchange the value of the house into its fiat denominated value & then purchase the corresponding ratio of cars it affords you at the current exchange rate for Car/House.

For Example: If your home is worth 100k & the cars you want to buy are worth 50k each that would make your exchange rate 2/1 – Cars/House. You would convert your home into 100k of fiat in order to purchase 2 cars by using the fiat to create a bridge between these 2 assets.  What you really want are the assets at each end of bridge itself but not the parts of the bridge those are actually worthless outside of helping you exchange value.  This is not dissimilar to Ripple (XRP) in the crypto space where tons of zealots in the XRP ARMY have failed to understand what Ripple actually is.  The only thing you are really interested in are the assets you intend to pass through Ripple not the parts of the conduit or in this case the Ripple (XRP) used to facilitate the exchange. This again is because most people have no idea what the truth about💰& are busy hoarding worthless paper under their beds rather an actual assets that you use the paper to transact.

You cannot divide by any number to reach 0 that is incorrect & one of the many widely misunderstood ideas about fiat currency that would be quickly understood if we all paid attention in 3rd grade when we learned about fraction. Below is a tweet & a graph of the USD over the last 100 years that represents a very common misconception most have about money & value, many believe they are onto some grand conspiracy to devalue their currency & savings to 0 because of a nefarious plot by Central Bankers that only they are wises enough to have figured out.  Its actually quite ridiculous and after how many decades of calling for armageddon based on this flawed logic & not seeing it happen could anyone continue to use the same ideas to predict more nonsense? 👿 Again the the central bankers are the smartest guys in the room & know what they are doing for the last few hundred years, all we need to see this is a little perspective

Most people only agree on this idea because they only view half the equation and perceive the USD is heading toward 0 however this is not the complete story and when dealing with markets we must account for the entire expression not just half, we are dealing with ratios after all right? 🤓👉This is that moment when you think about why the #1 super power in the 🌎 has a population ranked 26th at math behind Costa Rica 🤐👉What actually happens if u keep dividing a number in half?  Lets take an inch or centimeter and divide it by 2 and repeat the function…what you will find is that you actually have infinite information in finite spaces, a universe at all scales. So if you take the reciprocal of X/Y that you are dividing toward 0, but will never reach, and flip it to become Y/X you will be approaching infinity🐣

When we buy assets like houses, cars, bitcoin, or stocks they are in exchange of something else which often times is over looked or forgotten. Assets/x is the way this should be viewed and when done we can see the Central bankers know exactly what they are doing & majority of critics do not.  Below is a forecast made just after the election of Donald Trump on the update to the original 100 Yr Dow Jones posted in 2014. This updated forecast clearly illustrates the fractal nature of the waves during the last 100 years in US equities & this chart should look stunningly similar to the inverted USD chart as well it should since it is the denomination of the US Equities we see below. 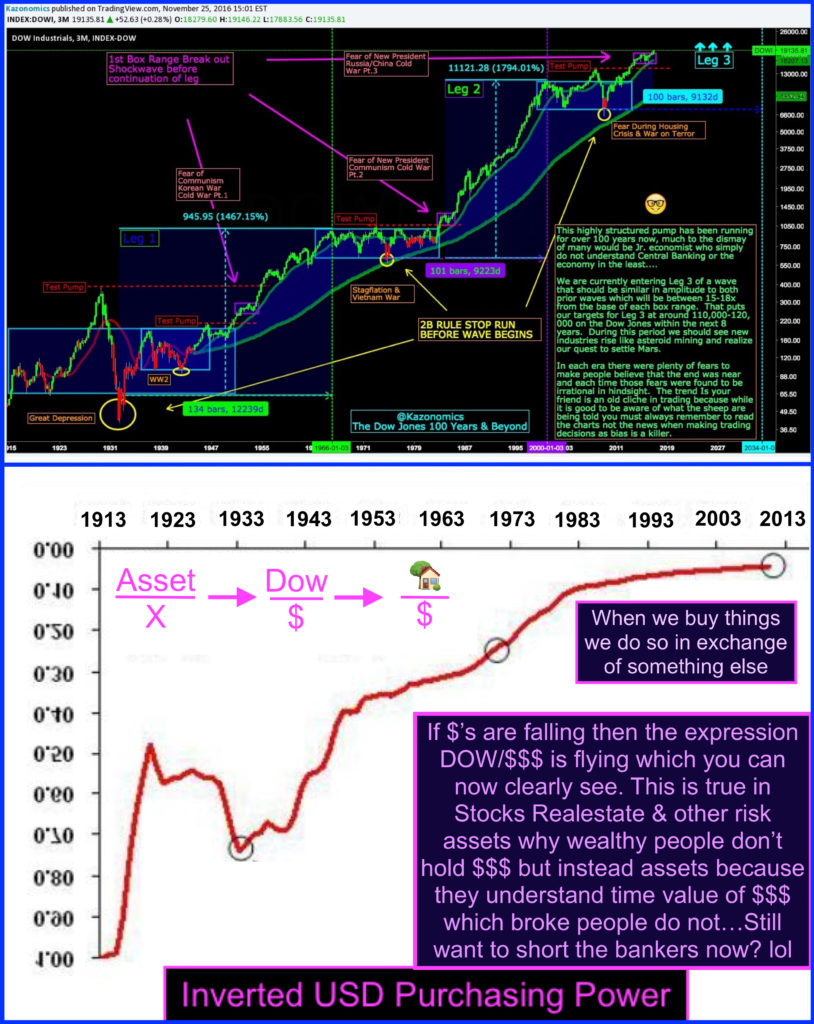 Viewed together Central Banks provided the means to leverage

’s own asset & produce more.  Loans tied to new assets at leverage allow us to pull raw materials out of the ground and create even more new asset a process that is repeated over and over again.  This process of pulling raw materials out of the ground and using fractional lending to leverage them is literally how you terraform a planet. In the last 110 yrs since the FED we’ve seen the most rapid gains in productivity, technology, & human population growth in recorded history. Many feel like we never escape perpetual wars & they are correct but what they don’t see is its a necessary evil in the scheme of things and not very different than the cycle of destruction & renewal we see in nature. Billy Clinton told you what this was and what you are in the grand scheme of things but most didn’t get the message there either. 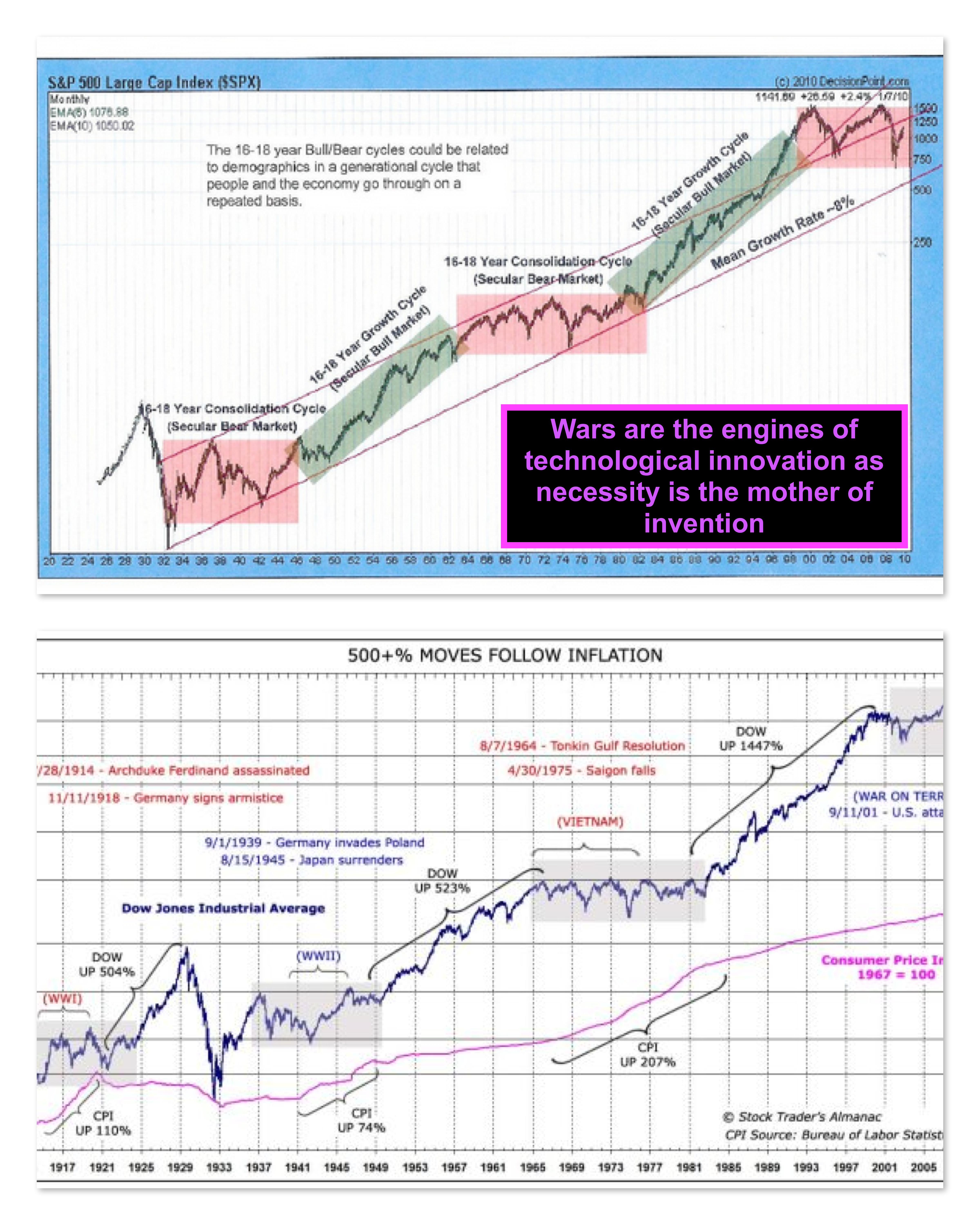 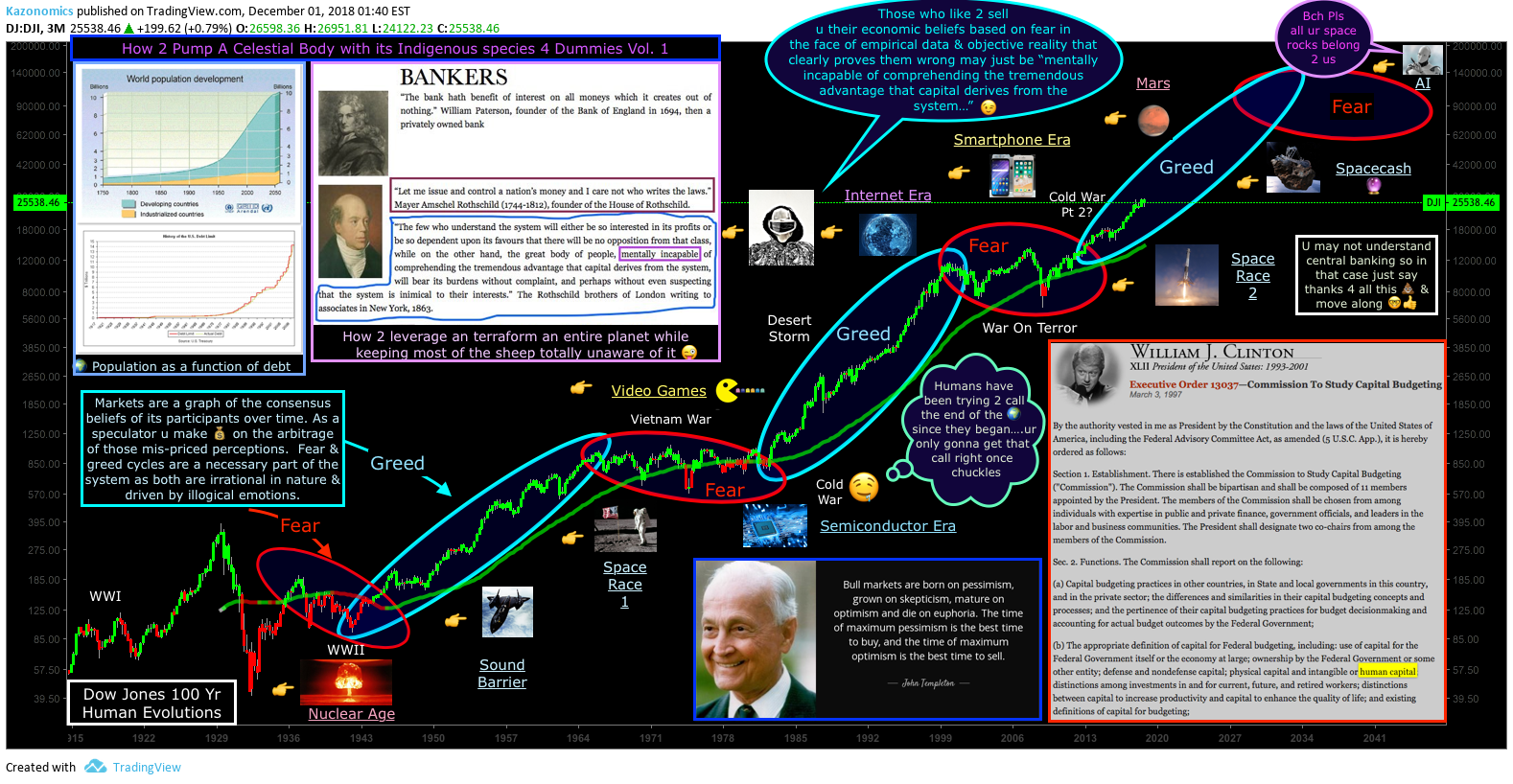 Everyone is so busy complaining why this system isn’t working for them and the answer couldn’t be more clear.  Its not your system you didn’t build it & it works exactly as intended for those who did and fully understand it.  The advances made in the

with this model in the last 100 years are nothing short of astounding the only thing more amazing is how few of the humans who have benefited from it actually understand wtf is going on. The last chart above is the 100 year Dow Technology chart update made December 1st 2018.  If you didn’t get it before maybe that one will help bring it all home for you. The Central Bankers have leveraged a celestial body & all of its assets to terraform this planet at an incredible pace that could never have been achieved without fractional reserve lending & the use of money credit.  We are now at the dawn of a new era where we can go off world and replicate the process with an asset base that is without limit 😎👉 #SpaceCash cometh and with this model we will be able to go off world and leverage assets like the Moon, Mars, and asteroids.  If this all seems like news to you it should, Steve Jobs never rushed down to the mail room to get anyones approval on what he was gonna do next and this is a fractal of that exact situation. The